Proximal epithelioid sarcoma of the vulva: A case report and review of the literature | Bravo-Taxa | Clinical Surgery Research Communications
Have a website account? Login or Register for exclusive website content.
Home > Vol 5, No 3 (2021) > Bravo-Taxa

Proximal epithelioid sarcoma of the vulva: A case report and review of the literature

Primary sarcomas of the vulva are rare, with an incidence of 1.5% to 5% of all vulvar malignancies. There are only 41 cases described in the English literature of proximal epithelioid sarcoma of the vulva, which also con-stitutes a highly aggressive neoplasm with a high rate of recurrence and metastasis. We are reporting the first case of vulvar epithelioid sarcoma reported in our country, Peru, and Latin America. We present the case of a 53-year-old woman with no significant history who presented a large tumor mass of 25 cm in the left hemi-vulva of 2 years of evolution, associated with intense pain. She underwent radical surgical resection withleft inguinopelvic lymphadenectomy and reconstruction of Rectus Abdominal Muscle Myocutaneous Flaps (TRAM).

Vulvar sarcoma constitutes 1.5–5% of all malignancies in this gynecologic region [1-5]. Types of sarcomas commonly present in the vulva include leiomyosarcomas, malignant fibrous histiocytoma, malignant rhabdoid tumor, angiosarcoma, rhabdomyosarcoma, and epithelioid sarcomas [1-3]. Epithelioid Sarcoma is subclassified into distal or proximal type about the involvement of upper and lower extremities or the pubic region and trunk, respectively. Proximal type epithelioid sarcoma of the vulva is an exceedingly rare soft tissue tumor, with only 41 cases described in the English literature, and extremely aggressive with a high rate of local recurrence and distant metastasis [2, 4]. The following publication provides the first case of vulvar epithelioid sarcoma reported in our country, Peru and Latin America; and reviews its clinical, histomorphological, treatment, and prognosis of this unusual pathology.

A 53-year-old woman presented with a palpable progressive growth tumor in the left hemi-vulva for 2 years, which became more abrupt in the last 6 months and generated permanent intense pain. Upon examination, an 18 cm-sized tumor was seen on the labia majora of the left hemi-vulva, without infiltration of the urethral meatus or vaginal introitus; however, it compromised the adjacent skin and presented a 2-3 cm-sized left inguinal lymphadenopathy. The coronal and axial MRI images revealed the presence of a 17.5 x 15 x 15.3 cm extensive solid lesion with polylobulated margins and necrotic component located in the left vulvar region, infiltrating fatty planes, and conditioning effect of mass on the adductor muscles fascia of the left thigh. In addition, lymphadenopathy was identified in the left inguinal region, external iliac chain, and left obturator group (Figure 1 A, B). Chest and brain CT were negative for metastases.

In November 2020, the multidisciplinary team decided to perform radical vulvar resection plus selective left inguinal and pelvic lymphadenectomy, as well as the reconstruction with a Rectus Abdominal Muscle Myocutaneous Flaps (TRAMP).
Gross examination showed a 33 x 30 x 14 cm-sized multilobed indurated tumor in the left hemi-vulva , extending to the vaginal introitus, suprapubic region, and bilateral inguinal region, predominantly on the left side (Figure 2 A, B, C, D) The sectional surface was solid, heterogeneous with intermingled tan- whitish, myxoid, necrotic, hemorrhagic, and cystic degeneration areas. The microscopic appearance of the tumor was composed of long polygonal spindle cells with abundant eosinophilic cytoplasm, pleomorphic vesicular nucleus, prominent nucleolus, and high mitotic activity, 22 mitoses per 10 high-power fields. Likewise, lymphovascular and lymph node invasion was identified. 14 of 19 inguinocrural lymph nodes and 5 of 7 iliac lymph nodes were compromised with the epithelioid sarcoma. The surgical margins were free of injury (Figure 3). The immunophenotype of the neoplastic cells showed immunoexpression for Pankeratin, EMA, Vimentin, Actin; while they were negative for Desmin, CD10, CD34, CD138, Melan A, HMB45, SOX-10, S100, Estrogen receptor, and CDX2. And the most relevant immunohistochemical finding, that determined the diagnosis, was the loss of INI-1 expression, concluding that the tumor corresponded to a Proximal Epithelioid Sarcoma of the vulva (Figure 4). 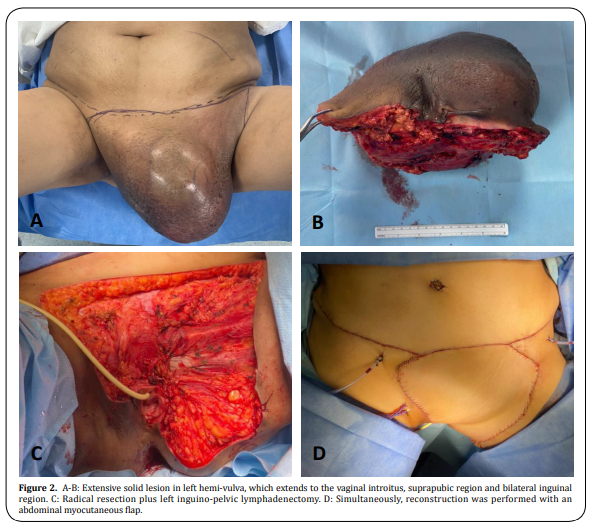 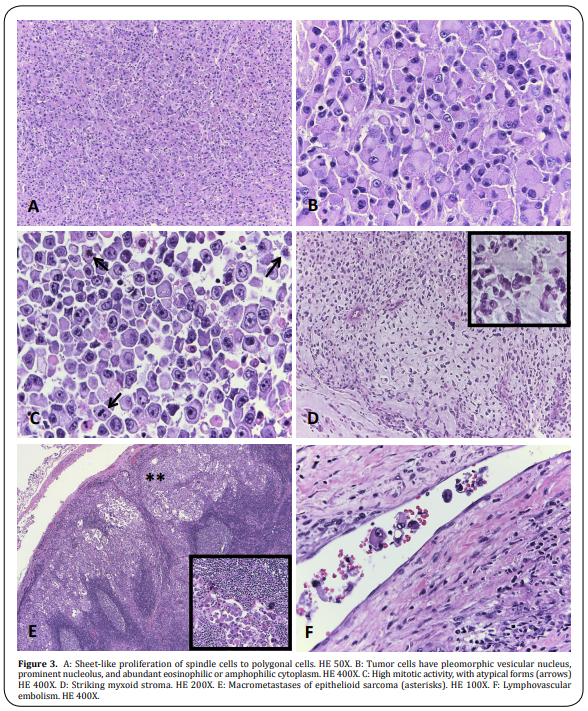 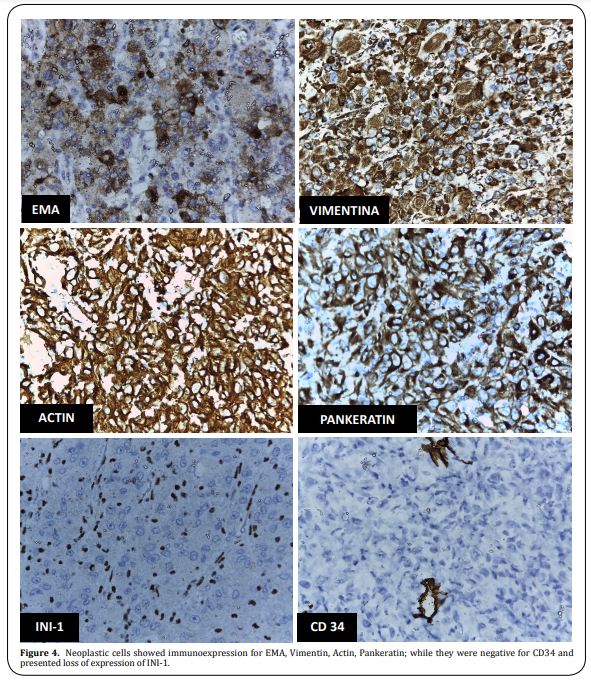 With this result, the patient was tributary to adjuvant treatment with radiotherapy and chemotherapy. She received 3 cycles of chemotherapy with Isofosfamide / Adriamycin. Subsequently, by July 2021, she completed 35 treatment cycles of external radiotherapy at a dose of 45 000 Gy to the pelvic and inguinal region using the Volumetric modulated arc therapy (WMAT) from 6/23/21 to 7/25/21 with excellent tolerance. Currently, she remains without evidence of recurrence after 9 months of follow-up, with the possibility of receiving more cycles of chemotherapy.

Vulvar cancer is the fourth most common cause of gynecological malignancy, constituting 5% of all cancers of the female genital tract [1,2], Among the various histological types of vulvar cancer, squamous cell carcinoma is the most common type and represents 95% of all malignant neoplasms in this gynecological area, followed by melanoma, sarcoma, and basal cell carcinoma [1]. Primary vulvar sarcomas are rare, reaching an incidence of 1.5 to 5% of cancers in this topographic region [2, 3].
Epithelioid sarcoma (ES) is a malignant soft tissue neoplasm of uncertain histogenesis, which was established as a distinctive disease by Ezinger in 1970 [3]. Epithelioid sarcomas (ES) are classified into distal, conventional, or classic type and proximal type based on its occurrence in the upper and lower or in the trunk and pubic region, respectively [2-4]. The proximal epithelioid sarcoma of the vulva are rare entities, with only 41 cases published in the English literature, and the first of them described by Piver et al. in 1972 [2, 4] (Table 1). 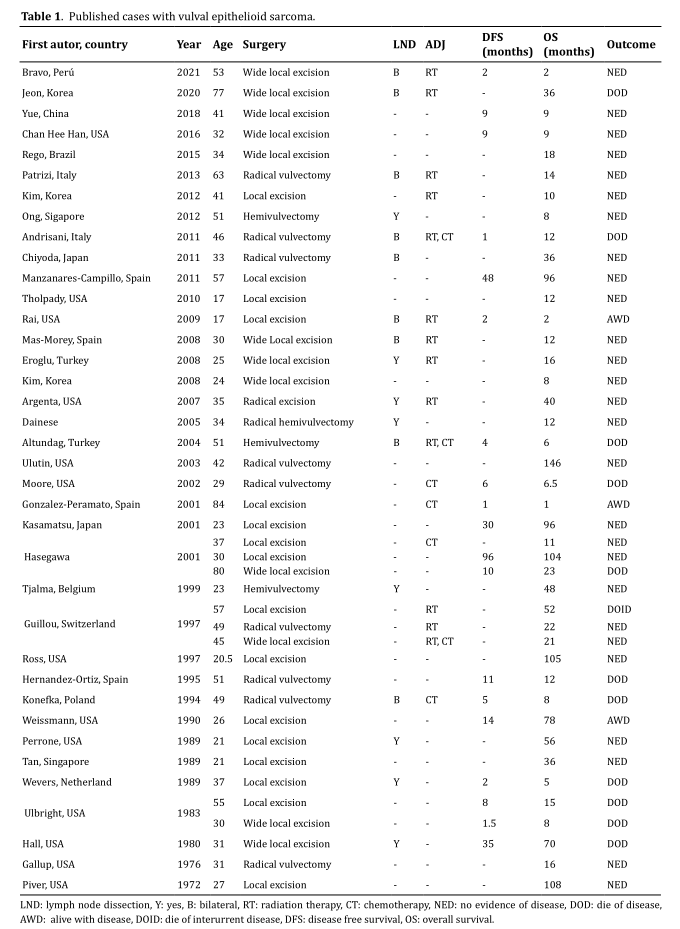 Proximal epithelioid sarcomas of the vulva are an extremely aggressive condition with a high tendency to recurrence and metastasis, so a timely diagnosis with surgical resection and wide negative margins is necessary.
Data related to the tumor is limited; therefore, it is particularly important to encourage prospective and randomized clinical trials that are focused on the treatment of the tumor and to determine the efficacy of possible adjuvant therapies as Tazemetostat, which seems to be the promising cure for advanced cases.

Dr. Bravo analyzed the clinical data and drafted the manuscript. Dr. Taxa provided the pathological results and provided professional guidance on this. Dr. López provided imaging studies and conducted follow up on the patient in the outpatient clinic. Dr. Taxa and Dr. López contributed to critical review and supervised the entire study. All the authors have read and approved the final version of this manuscript.

Availability of data and materials

The authors declare that there are no conflicts of interest.