A perspective of extremity vascular trauma epidemiology and its management in a resource limited set up | Gebregiorgis | Clinical Surgery Research Communications
Have a website account? Login or Register for exclusive website content.
Home > Vol 5, No 3 (2021) > Gebregiorgis

Background: Extremity vascular injuries are one of the major causes of limb loss and potentially preventable deaths after trauma. Although it is a major challenge, especially in countries with a less established trauma center, early diagnosis, and intervention are important for a better outcome. The aim of this study was to describe the epidemiology, management strategies, and outcomes of extremity vascular trauma in the Ethiopian setting.
Methods: A retrospective observational study was conducted among all extremity vascular trauma patients who were admitted and treated at Tikur Anbessa Specialized Hospital (TASH) Between June 2015 and May 2020.
Results: A total of 85 patients with extremity vascular trauma, predominantly male (90.6%), were included in the study. The mean age was 27 ± 9 years. Penetrating trauma caused 89.4% of extremity vascular injuries. The majority of the injuries are caused by stab/sharp (40%), bullet (29.4%) and road traffic accidents (17.7%). The brachial artery was the commonest vessel injured accounting for 36.5% followed by femoral artery injury of (22.4%). The commonest types of vascular injuries were complete transection (74.1%), laceration (15.3%), and partial transection (8.2%). The most commonly used method of vascular reconstruction was reverse interposition venous graft accounting for 45.9%. Other methods were ligation & hemostasis (20%), primary repair with End-to-End Anastomosis (17.7%), primary simple repair (15.3%), and venous patch (1.2%). A limb salvage rate of 91.8% was achieved despite a 67.1% of late presentation (>6 hours).
Conclusion: Vascular injuries are mainly due to violence and road traffic accidents. Limb loss and mortality due to this injury can be mitigated by improving health policies, implementing emergency ambulatory systems, and provision of vascular services with better training centers.

Trauma is one of the leading worldwide health problems that cause an estimate of more than 5.8 million people to die each year (10% of the world’s total death) [1, 2]. Though vascular injury accounts for only 1-2% of the total injury, hemorrhages resulting fromthe injury are a major cause of potentially preventable deaths [3-6]. Although uncommon following civiliantrauma, vascular injuries may be responsible for upto 20% of trauma deaths [7] and the highest utilization of hospital resources [3, 4, 8]. Vascular injuries to theextremity are common accounting for up to half of allvascular injuries, and it is the third leading cause ofpotentially survivable injury [5, 9-11].
Extremity vascular trauma patients tend to be predominantly male and mainly occur in the younger population with average ages in the 30’s [3, 4, 10]. Extremity vascular injury can result from both blunt and penetrating mechanisms. Those with blunt vascular injury to the extremity have a higher rate of mortality (2-5%) than penetrating trauma mainly due to associated non-vascular injuries in the blunt trauma. The amputation rate is also higher in blunt extremity vascular injuries [4, 12].
In Ethiopia, injury is a major cause of mortality with an estimated rate of 12% and extremity injury resulting in fracture and/or dislocation is the commonest one [13, 14]. Studies have also shown a higher incidence of amputation in trauma patients with comminuted fractures associated with vascular injury [15-17]. In Ethiopia, a literature review showed very limited studies done on vascular trauma. The aim of this study was to describe the extremity vascular trauma experience of a tertiary hospital (TASH) in Ethiopia in terms of epidemiology, management strategy, and outcome.

Tikur Anbessa specialized hospital (TASH) is an 800-bed tertiary referral hospital that offers diagnosis & treatment for approximately 500,000 patients a year. The hospital gives specialized clinical services including vascular surgery for patients referred from the whole country. The hospital is equipped with 14 operating theaters; one is dedicated to vascular surgery. Recently, the center has also acquired a new bi-plane and a monoplane cardiac catheterization laboratory that can also serve peripheral vascular disease.
A retrospective cross-sectional study was conducted on patients with extremity vascular trauma between June 2015 and May 2020. All patients who were diagnosed and treated for extremity vascular trauma with a named blood vessel injury were included in the study. While those patients with an injury to the named blood vessel proximal to the junctional zone (central injury), proximal to the axillary artery (upper extremity), proximal to the common femoral artery (lower extremity), and non-extremity peripheral vascular injuries were excluded.
Records were reviewed to examine demographic, anthropometric, residence, occupation, duration, type, site, mechanism, and any other associated injuries. A clinical, laboratory, radiological, echocardiographic, operative data, type of repair, perioperative complications, hospital stay, and other covariates like other morbidity and mortality were collected using a structured data abstraction format prepared for this study. Data were collected through self-administered a structured questionnaire from an existing HMIS logbook, registry book, and patients chart at TASH. During data collection, the principal investigator did supervise all activities during the data collection. Data completeness and consistency were checked on spot questionnaires, and missed variables were turned back for correction. Data was then cleaned manually for consistency, for any missing values, and finally entered into SPSS Version 23.0 for analysis. Descriptive analysis was performed using SPSS version 23.0 to describe the study variables. Frequency analysis was run for socio-demographic, clinical diagnosis, and management outcomes. Finally, the findigs were described in the text, percent, and means, and presented using frequency tables and charts.
Ethical clearance was granted from Institutional Review Board; Collage of Health Science Addis Ababa University. A letter of permission to retrieve a medical record of needed patients from an archive was then obtained from Tikur Anbessa Specialized Hospital. Every aspect of human rights, which includes the right to privacy and confidentiality, was maintained throughout the study and measures were taken to maintain anonymity by not including patients’ names in the questionnaire. 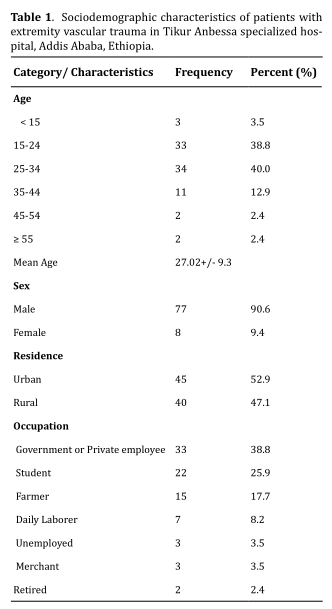 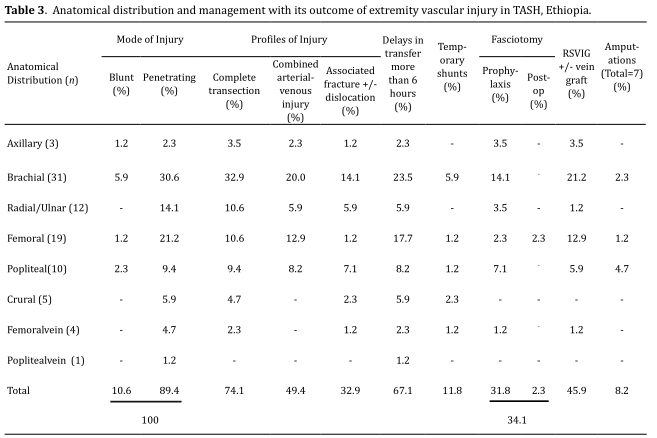 Upon arrival (on referral) to TASH; eighteen (21.2%) patients had been operated on at forwarding locations and ten (11.8%) patients came after a temporary shunt was applied to the injured vessels & eight (9.4%) patients had a ligated vessels for hemostatic purpose. Since patients who had a shunt were not heparinized and traveled a long distance before reaching the tertiary hospital, they were all found to be non-patent. The material used was an intravenous set plastic tube and was applied to five patients with brachial artery injury and one for each injury to the superficial femoral artery, popliteal artery, posterior tibial artery, anterior tibial artery and femoral vein.
Open surgical techniques were employed for all cases. As illustrated in Table 3 the method used for vascular reconstruction mainly was reverse interposition venous graft (commonly GSV) in 39 (45.9%); followed by ligation 17 (20%), primary end to end anastomosis 15 (17.7%), and primary repair 13 (15.3%); in which fogarty thrombectomy was coupled for those with thrombosis. The venous patch was done for one patient (1.2%) with a wall defect and for the patient with vascular contusion who had a thrombosis an arteriotomy then thrombectomy was done. Fasciotomy was done in 29 (34.1%); as prophylaxis in 27 (93.1%), and post-operatively for compartment syndrome in 2 (6.9%). The type of anesthesia used was generral anesthesia in 66 (77.6%), spinal anesthesia in 10 (11.8%), and block in 9 (10.6%) from which 2 (2.3%) were converted to GA.
Surgical wound infection was the commonest postop complication with 32 (37.6%), followed by palsy 17 (20%), graft failure or occlusion 9 (10.6%), sepsis 2 (2.4%) and bleeding 1 (1.2%). Graft occlusion occurred early within the first 30 days, despite early surgical intervention the amputation rate was 7 (8.2%). The early patency rate was 59 (69.4%). After a median follow-up period of 9 months (range, 3-24), long-term results showed a patency rate of 71.8% with preservation of limb function in 55 (64.7%). The disability rate was 30 (35.3%), which was due to palsy/weakness 18 (60%), amputated limb 7 (23.3%), and wound contracture 5 (16.7%). No patients expired and all were discharged home. The median length of hospital stay was 9 days, with the range of 2 to 102 days.

Extremity vascular injury mainly affects the working force and young adults of society. It could be attributed to the rise of violence which directly increases the incidence of extremity vascular injuries. Vascular injury to the extremity is a surgical emergency where a delay in the diagnosis and treatment can lead to limb loss or death. After arrival to the hospital; bleeding control, resuscitation, and restoration of blood flow are the mainstays of management. Even though, intervention with endovascular techniques is increasing in the western setup because of the unavailability of its service in our setup only open surgical techniques are applied.

No funding was received.

All authors declared that there is no competing interest.

The manuscript has been read and approved by all authors

Availability of data and materials

A soft copy of all data used for this article are available from the corresponding author, it can be made available up at a reasonable request.

The study was approved by the Research & Ethical committee of Addis Ababa University, College of health science.